October's Trip
will be to
​Ormond Beach
Monday​
October 23rd

Ormond Beach
is the neighbor of
Daytona Beach
​and is home to
​Tomoka State Park.
We understand that
Ormond Beach
is where locals
​go instead of Daytona,
leaving Daytona to the tourist!
Ormond Beach is the northern neighbor of Daytona Beach and is home to Tomoka State Park.
Ormond Beach was once within the domain of the Timucuan Indians. Ormond Beach was frequented by Timacuan Indians, but never truly inhabited until 1643 when Quakers blown off course to the New Englandarea ran ashore. They settled in a small encampment along the Atlantic shore. Early relations with neighboring tribes were fruitful, however, in 1704 a local Timacuan chief, Oseanoha, led a raid of the encampment killing most of the population. In 1708 Spaniards inhabited the area and laid claim until British control began. The city is named for James Ormond I, an Anglo-Irish-Scottish sea captain commissioned by King Ferdinand VII of Spain to bring Franciscan settlers to this part of Florida. Ormond had served Britain and Spain in the Napoleonic Wars as a ship captain, and was rewarded for his services to Spain by King Ferdinand VII. Ormond later worked for the Scottish Indian trade company of Panton, Leslie & Company, and his armed brig was called the Somerset. After returning to Spanish control, in 1821, Florida was acquired from Spain by the United States, but hostilities during the Second Seminole War delayed settlement until after 1842. In 1875, the city was founded as New Britain by inhabitants from New Britain, Connecticut, but would be incorporated in 1880 as Ormond for its early plantation owner.
With its hard, white beach, Ormond became popular for the wealthy seeking relief from northern winters during the Floridian boom in tourism following the Civil War. The St. Johns & Halifax Railroad arrived in 1886, and the first bridge across the Halifax River was built in 1887. John Anderson and James Downing Price opened the Ormond Hotel on January 1, 1888. Henry Flagler bought the hotel in 1890 and expanded it to accommodate 600 guests. It would be one in a series of Gilded Age hotels catering to passengers aboard his Florida East Coast Railway, which had purchased the St. Johns & Halifax Railroad. Once a well-known landmark which was listed on the National Register of Historic Places in 1980, the hotel was razed in 1992.
One of Flagler's guests at the Ormond Hotel was his former business partner at the Standard Oil Company, John D. Rockefeller. He arrived in 1914 and after four seasons at the hotel bought an estate called The Casements, that would be Rockefeller's winter home during the latter part of his life. Sold by his heirs in 1939, it was purchased by the city in 1973 and now serves as a cultural center. It is the community's best-known historical structure.
Beginning in 1902, some of the first automobile races were held on the compacted sand from Ormond south to Daytona Beach. Pioneers in the industry, including Ransom Olds and Alexander Winton, tested their inventions. The American Automobile Association brought timing equipment in 1903 and the area acquired the nickname "The Birthplace of Speed."[6] In 1907 Glenn Curtiss set an unofficial world record of 136.36 miles per hour (219.45 km/h), on a 40-horsepower (30 kW) 269 cu in (4,410 cc) Curtiss V-8 motorcycle. Lee Bible, in the record-breaking, but fatal, White Triplex, was less fortunate. Driving on the beach is still permitted on some stretches.
The city was renamed Ormond Beach in 1949. 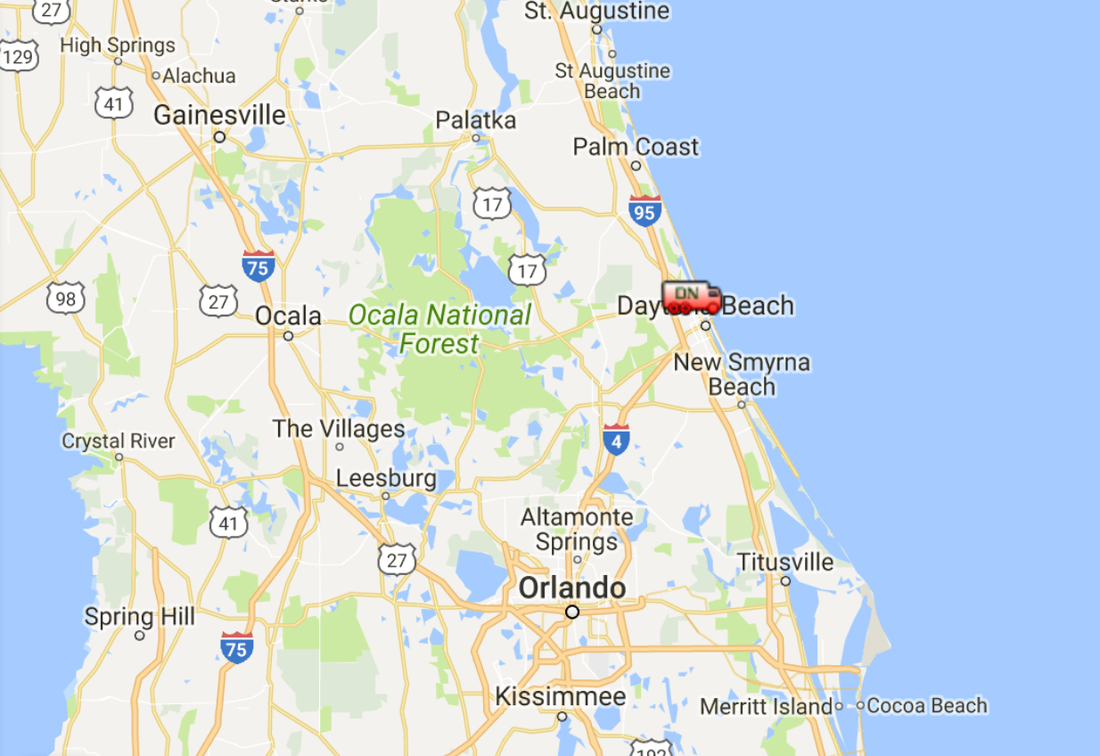